For those of you coming from newer phones (Charge, TB, revo, etc)

Hey guys, currently using the Charge but having some problems with it, though i'm not sure yet if my phone is defective or some of the problems are more widespread. Anyway I have to decide whether to replace with another Charge or getting a D3. Most of the reviews I've read are coming from OG droid owners, but I'm wondering how the D3 compares to those of you who've made the switch within the 14 day window with a newer phone.

I really enjoy the camera on the Charge, I thought it great step up from the incredible I originally had, while image quality was similar the charge actually took the picture a good deal quicker it seemed, with better focus. How does the D3 stack up in that department?

One of the main reasons for returning the Charge is the wifi signal and speed was really bad. Now i'm not sure if the problem was just with my phone, or other's were experiencing the same. Hard to judge Wifi when everyone has a different connection/speed.

I use wifi most of the time (90%) so I never really used the 4g. My rated home connection is 25/25 mbps up and down. Through desktop my speeds are 30 mb down, 23 mb up on average. My Incredible hits 23 mb down, 16 mb up on average. The connection is pretty stable, so you won't see too much discrepancies between tests. For the charge on the other hand, the speed was all over the map. My download averaged about 11 mbps, but more importantly my upload could not get past the 1.6 mb mark, sometimes sitting below 1mbps.

Does the wifi on the D3 come close to what you expect?

Here's my Droid 3 on WiFi at work. I'm not sure what they allocate for the "open" connection. My Droid (original) gets 1.8mbps uploads in comparison 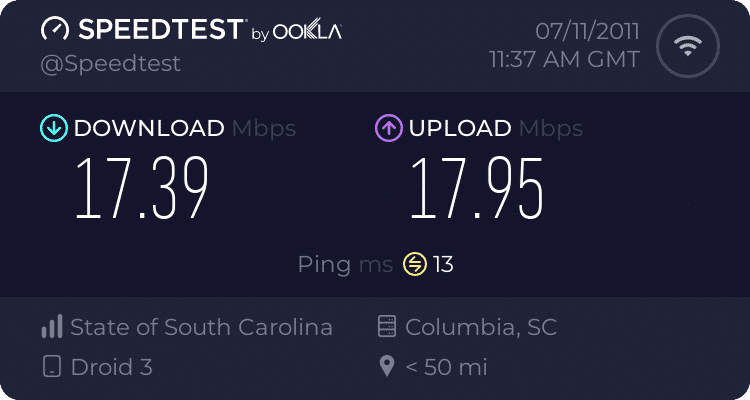 I think d3 supports wireless-n, not entirely sure though.
N

My wife had a thunderbolt and then a charge. We are upgrading her to the D3 today (as soon as fed ex arrives)

Her biggest gripe was the lack of a keyboard and I felt the charge seemed really slow.

I will let you know how it goes.

Ned said:
My wife had a thunderbolt and then a charge. We are upgrading her to the D3 today (as soon as fed ex arrives)

Her biggest gripe was the lack of a keyboard and I felt the charge seemed really slow.

I will let you know how it goes.

Sent from my ADR6400L using Tapatalk
Click to expand...

FedEx just dropped mine off. I am coming from Thunderbolt. She will like the keyboard. It is very nice. Especially having dedicated numbers.
I

darkmatter said:
I think d3 supports wireless-n, not entirely sure though.
Click to expand...

according to developer.motorola.com you are correct :icon_ banana:

I am really loving my Droid 3, more so than the Charage. I will say the Charge has a great display and you can root it but the D3 is a step up in key areas.
N

The D3 just arrived. Can not activate it since its not my phone. First impressions are great just playing around with it. Very fast and very responsive.

Nice to see the "touch the four corners of the first screen" trick still works. At least I can get on wireless. Web seems very fast so far too.

Just like everyone else, I have tried all the available root exploits and nothing works.

Sent from my ADR6400L using Tapatalk

I'm coming from a Thunderbolt and just got the Droid 3 today. So far I do like it, although its been a short run thus far. The keyboard is a huge addition after going without one for so long. The phone seems pretty fast with the Wifi on and the battery still has 20% left after taking it immediately out of the box and getting it set up at Verizon, 5.5 hours ago. I think thats pretty cool. Time will tell if the purchase was worth it I suppose but my initial impressions are that I feel right at home after having an OG before the TB.
You must log in or register to reply here.

D
Droid 3 not charging from laptop after phone's been completely dead.