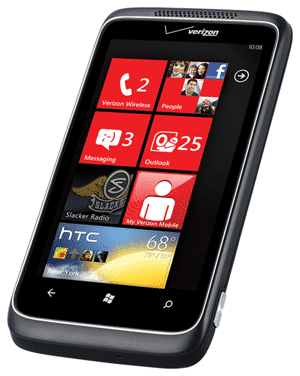 Don't worry your on the right site! Although we normally try to keep the news dedicated to Android and the Droid lineup of phones, this bit of news I find rather interesting and wondering if this could be the beginning of something new in the smart phone world. Today Verizon Wireless has announced it will begin offering it's first Windows Phone 7 the HTC Trophy next week.

Microsoft unveiled the Windows Phone 7 last year and sales have been rather weak since the release. With the phones now landing on the nation's largest network could that change? Who would have thought 10 years ago Microsoft would be a leader in gaming consoles? Let us know your thoughts!

Full Press Release Below:
BASKING RIDGE, N.J. – HTC Trophy™ is the first Windows Phone 7 device to come to Verizon Wireless, bringing a new dimension of gaming and entertainment to the nation’s most reliable 3G network.

Windows Phone is the only phone that lets you play games with Xbox LIVE. Customers can sync directly with Xbox LIVE mobile to access their avatar, profile and gamer score to keep track of their wins. HTC Trophy also allows consumers to play by themselves or challenge friends in turn-based games. In addition to the many mobile gaming features, customers who buy an HTC Trophy before July 15 get a free Xbox 360 console game. Game enthusiasts can choose from Halo: Reach, Kinect Sports and Lode Runner – up to $60 value.

HTC Trophy features the Music + Video Hub, giving customers quick access to music and movies on their device. Customers can stream or download millions of songs with a Zune Pass subscription and access over 15,000 quality apps and games in Windows Phone Marketplace through the Marketplace Hub.

· Global ready - allowing customers to enjoy wireless voice and data service in more than 200 countries, with more than 125 with 3G speeds

· View and edit Microsoft Office® documents, including Excel®, Word® and PowerPoint® with the Office Hub and data access on SharePoint® servers


Pricing and availability:
· HTC Trophy will be available online at Cell Phones - Smartphones: Cell Phone Service, Accessories - Verizon Wireless on May 26, and in Verizon Wireless Communication Stores on June 2 for $149.99 after a $50 mail-in rebate with a new two-year customer agreement. Customers will receive the rebate in the form of a debit card; upon receipt, customers may use the card as cash anywhere debit cards are accepted.

· Verizon Wireless customers traveling outside of the United States should contact Verizon Wireless’ global customer support team at 1-800-922-0204 before embarking on their trip to ensure their phones have the right features for global usage.

The only thing that would ever make me want a WP7 phone at this time is the Zune music player, which I absolutely love. Other than that these phones seem to be sorta lacking. I think I'll just find myself a Zune HD somewhere cheap.

Why is this Droid news. WTF!?
B

The 16GB of Onboard storage makes me feel slighted at the fact that my HTC Thunderbolt has 2.0GB free after everything is set up when it was advertised as 8GB. Where is that angry face smiley.... here we are :icon_evil:
OP

Because I wanted to get some feedback from Android users on the win7 platform.


DanDroidX said:
Why is this Droid news. WTF!?
Click to expand...

danDroid said:
Because I wanted to get some feedback from Android users on the win7 platform.


DanDroidX said:
Why is this Droid news. WTF!?
Click to expand...

One of my co-workers got a Windows phone and let me use it... No thanks, it reminds me of facebook - loaded with tons of stuff I'll never use and contrary to what my co-worker thought, it was really laggy. Still, nice to see Verizon opening up a bit.
S

I wonder how many times a day it needs a reboot.
OP

Hope they have a ctrl-alt-del shortcut


SithDroid2187 said:
I wonder how many times a day it needs a reboot.
Click to expand...

danDroid said:
Hope they have a ctrl-alt-del shortcut


SithDroid2187 said:
I wonder how many times a day it needs a reboot.
Click to expand...


Haha that made me chuckal a bit!

DanDroidX said:
Why is this Droid news. WTF!?
Click to expand...

To be honest, I wondered the same thing. But lets put it this way. It's his ball, he can do what he wants with it.
B

Well minus the Windows part this phone seems capable. The 16gb on-board is impressive and I like th 3.8" screen, I am not a big fan of these greater than 4 inch portable TVs that seem to be the standard of todays phones. Props to you Dan for posting this about Windows phone to get a rise out of people. Now if only others would be as open minded to technology and not set in stone about what we talk about. I feel like if that is what all Android users become they will be just as bad as i*hone users and are so closed minded that they cannot see great new tech out there. Keep on keeping on.
J

I hope WP7 does well. Its the only thing I would think of switching to if I didnt like Android anymore. There are a couple of pros they both share that I cant get with most other phones.

So this is basically a Nexus one lol
D

I have the atrix over on ATT... if this Windows 7 phone on verizon was 4G i would definitely get it. My goal is to have a Blackberry, Iphone, Droid, and Windows 7 phone... but I also want 4G on the Verizon network.

Other than the silly homescreen which is not for me (and I've seen droid users set up their homescreen this way - MIUI anyone?) This is a pretty pimp phone. I wonder if WP7 slows the hardware down as much as blur and sense. Since the software is implemented for the hardware, it may be pretty snappy.

As well, it is good to see Big Red opening it's horizons. Though I am quite positive that it is for the sake of widening it's revenue base.

my $.02
You must log in or register to reply here.