Ultra Pixel Is The Next Flagship Phone By Google?! 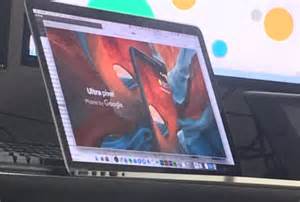 Earlier today an outlandish rumor started circulating which suggested that Google would be announcing 3 phones at their major event. According to the rumor we would see the two devices we already know about, the Pixel 2 and Pixel 2 XL, and we would see a device we have never heard of the "Ultra Pixel". The rumor stemmed from an image that was released that seemed to show promo material on the desktop monitor of a Googler who had stepped away from their desk.

The image is said to be a slide from the Google presentation. The leaker gave extra input along with the image stating that the phone would come with a "new kind of fingerprint sensor" (display embedded?) and a dual camera system. The next slide shows three different devices with the phrase "the future of Android is fluid" suggesting that Android's new OS would be gesture based and lacking a home button just like what we have seen with the iPhone X. This rumor should be taken with a heavy dose of salt. It is highly unlikely that Google would have been able to keep this a secret when the flood gates have been open some time on Pixel 2 and Pixel 2 XL rumors.

looks more like a tablet. I might consider a pixel tablet though I doubt I would be able to afford another device right now. amazon echo has me on hold right now with their new devices. .

Leak is not legit... They were showing the phones though on the screen not the laptop..

Google's Pixel and Pixel XL Being Announced On October 4th