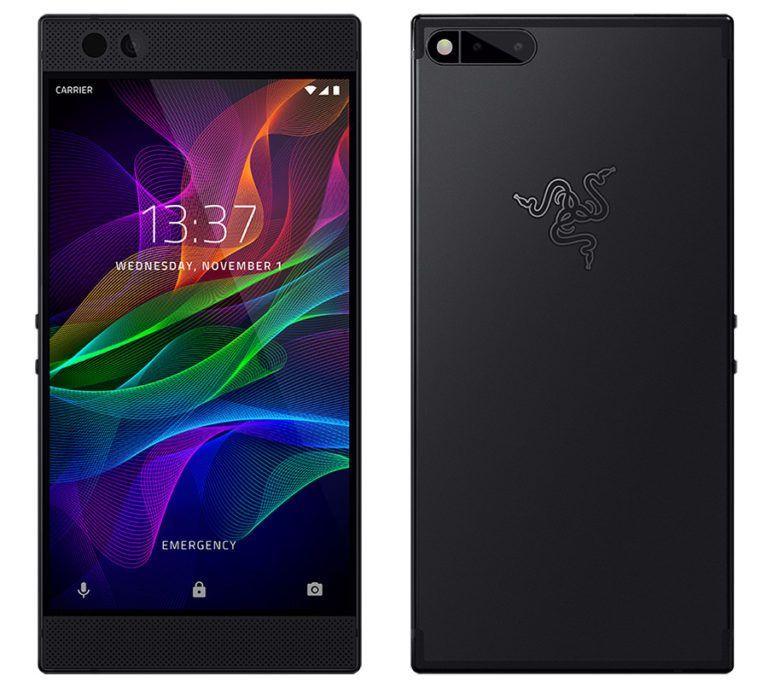 The phone for hardcore gamers is here! Razer just announced their new phone and it looks pretty sweet. The company who is most well known for their Gaming PC peripherals and Gaming Laptops announced a while back that they would be putting together a phone. The display will likely be the main selling point of this phone. The phone features a 5.7" 2560x1440 Sharp IGZO LCD display with a refresh rate of 120MHz. The phone will also feature "Ultramotion" which is a refresh technology that syncs the GPU with the display to eliminate tearing and lag.

The phone has some pretty major bezels fortunately the phone makes good use of all this space with dual front facing stereo speakers. Dual dedicated amplifiers power the speakers. The phone is also THX certified. Other specs for the phone include a Snapdragon 835 cpu, 8GB of RAM, 64GB of on board storage, microSD card slot, 4,000mah battery, support for Quick Charge 4.0+, dual rear camera setup with a 12mp wide angle lens, and 13mp 2x telephoto zoom lens. The phone will launch with Android 7.1.1, but will see the Oreo update during the first quarter of 2018. This looks like a pretty strong device. The live stream was able to get about 7,500 viewers, and the video has had about 50,000 views since it finished 4 hours ago. The interest in the phone is certainly not on par with phone's being released by other OEMs that have been in the game much longer, but there is a respectable amount of buzz and hype being generated. Anyone picking this phone up?

I like the style of the phone. the edges are not as round as the samsung phones.

Im willing to bet this phone will not be cheap and im saying more like iPhone Pricing which may turn off many from a Unknown Company in the Mobile Phone Department. Yes they make High End PCs. Android is a Different Animal and not sure people will spend that kind of money for mobile Gaming. There may only be a small group for that. Those who are willing to wait may see it discounted if sales are poor like the Essential Phone.

$699 was the price people were saying

DOA if it doesn't have Verizon compatibility.

Sent from my Pixel 2 XL using Tapatalk
Click to expand...

That is Pretty Good for those Specs Considering but yes it would need to be Compatible with VZW also to be Successful. Doubt a GSM only version would make it.
A

750€ is expensive, we find cheaper smartphones with similar data sheets but it is a much better quality-price ratio compared to the iPhone 7, 8, X or the Galaxy S8.

ayanav said:
750€ is expensive, we find cheaper smartphones with similar data sheets but it is a much better quality-price ratio compared to the iPhone 7, 8, X or the Galaxy S8.
Click to expand...

that depends on the user and their needs

me just sayin said:
that depends on the user and their needs
Click to expand...

One thing I think we can say about 2017, there literally is a solid phone for everyone. Whether you are on the Android side or iOS side you have choices. And plenty of them.

In the category of stock/near stock you have Google pixel 2 &2xl, essential, one plus, and Moto.

Just take a category and it seems like you have at least 2 or 3 good phones to choose from, except for maybe the sub 5in display phone.

And good to have the note back in the competition this year. So far it's looking like Samsung will be sticking it out with us and not having an early exit for their phone.

Sent from my Nexus 6P using Tapatalk
You must log in or register to reply here.