Motorola is taking on Samsung directly in their latest advertisements, and it goes without saying that it’s a pretty bold move. Until now, most of the Android manufacturers have been attacking Apple, but lately it’s a whole different ball game out there.
Seeing as Apple is trailing behind, Android holds the greatest market share currently, and right at the top of the Android market is Samsung. It’s only natural that Motorola would launch a campaign against the biggest name in the business.
This is certainly the first time we’ve seen an Android opponent attack another Android competitor. Buckle your seatbelts folks, because it may get pretty hairy from here on out.
I’m sure you’re more interested in seeing the ads, and how Motorola is fighting back. It’s simple really, they’re doing exactly what Samsung did to Apple not too long ago. Motorola is comparing the Galaxy SIII and the Droid RAZR HD, clearly claiming their own starchild as the better of the two.
The ads were released on Motorola’s landing page for the RAZR late yesterday evening. The first, which you can see above, clearly attacks the Galaxy SIII’s average battery life. According to Motorola, the RAZR HD gets 24% more juice, which add up to provide a complete rating of 24 hours under ordinary use.
Okay, you can have that one Motorola, what else?
Apparently the RAZR HD also has a lot more protection than the Galaxy SIII. The RAZR HD has a body that is designed with Kevlar fiber and water repellent nanocoating, which is short for nigh indestructible. On the other hand, the Samsung Galaxy SIII only has a plastic case that’s not quite as rugged, and durable.
Motorola also claims that the RAZR HD gets faster download speeds, which actually doesn’t make much sense. Both the RAZR HD and the Galaxy SIII are using the same exact Qualcomm processor and modem models.
Finally, Motorola claims that the RAZR HD is much more attractive and thinner in size. When compared side by side with the SIII this would seem to be true. What Motorola fails to disclose, however, is that the appeal of a design is influenced primarily by personal taste. Some folks may prefer the Samsung Galaxy SIII design over the RAZR HD, which is blatantly obvious considering Samsung continues to retain the most market share.

I have the HD and love it but I guess moto forgot to mention the RAM... which theoretically makes the samsung device more future proof.

Motorola should be careful, not entirely sure they want to pick on the big guy on the block especially after their ICS debacle on the Razr Maxx.....

I mean assuming that you did embed the video and it flat out isn't viewable on my Maxx is very sad... 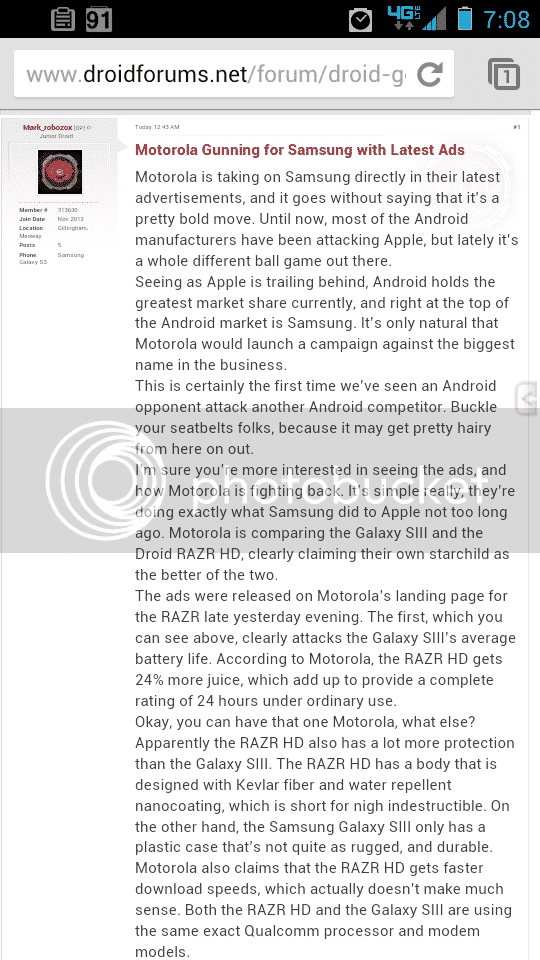 Maybe they should get their own crap working properly before attacking an android sister company!
You must log in or register to reply here.

“What you WANT is irrelevant, what you've CHOSEN is at hand.”