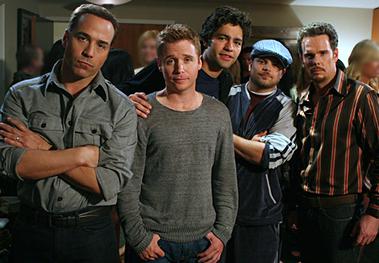 ​
After binge watching Entourage for the past few week I checked out the movie in theaters and felt like the movie was just another episode. Don't get me wrong I enjoyed it, but I felt like it could have just as well been a couple of episodes versus a full length movie. I will say that all the things you loved about the show makes its way into the movie, unfortunately they showed too much of it in the previews. As far as the rating I actually give it a 7.5 as I felt is was a decent movie and as long as you know going in what to expect you will be fine and will enjoy it. You will laugh at the show characters on the screen as they continue where they left off at the end of the series. This movie is definitely not for young viewers. If you watched the show then you know what to expect. Speaking of the show, the producers says you do not need to have watched the show to enjoy the movie but I say it will help with enjoying the movie. I feel this show was geared more toward bringing in fans of the show as well as encouraging people who never watch the show to binge watch via HBO.
Edit to the score:
Fans of the show will give it a 7 but people who are not familiar would go 5/10. The reality is if you finished season 8 wanting more than this is for you but if you stopped caring about it after season 3 or you haven't seen entourage then you will walk out the theater feeling like you threw away money. As I said above, the movie might as well have been a direct to HBO movie.
On another note:
Like Netflix, HBO has a library of original series and I know they want to try and see how it will handle being on the big screen. But part of what makes those original series what it is is that it allow the viewer to enjoy a quality series on the couch. With big cable falling slowly to the cord cutters and companies like Netflix and HBO producing content, the question will come about how to gain more money to produce more quality shows. Would customers paying a monthly fee except paying an extra fee to watch a series?
Is there a way for companies like Netflix and HBO to bring in more revenue to produce more and better content?

I believe time will answer those questions as we continue to figure out the future of entertainment.
Last edited: Jun 5, 2015

I'm a big Entourage fan and look forward to seeing the movie...
OP

After sleeping on it a few days had to edit my op.

I don't think we have to worry about how HBO can make more money. HBO generated 4.9 Billion last year and has a street value estimated at 118 Billion. Those numbers can certainly generate quality content.

That's the nature of TV shows turned into movies. They pretty much just have to be a long episode for it to work. You can't start over or go another direction or the fans will be pissed. But its hard to make it stand alone from a long running series too.

I think that's why its easier to make a series from a movie over doing it the other way around. I never got into this series so I'm not interested in the movie.

I've never heard of this show so the movie might have a higher rating from someone in my situation.
OP

Ollie said:
I've never heard of this show so the movie might have a higher rating from someone in my situation.
Click to expand...

Last I checked it got a 30 on rotten tomatoes.

I had finished binge watching the show when I went to see the movie so I had the "what's next" mode. After binge watching it was a continuing of the binge for me. But after thinking about it again I had to ask myself if I would under any circumstance recommend the movie to any one, and I can away feeling like they would be better off getting HBO now (or go) and binge watch the show when you snowed in in the winter and then finish it off with the movie showing on HBO. But for a summer movie save your money for something else.
You must log in or register to reply here.

The Killing Joke Movie experience: Is it worth it?

RIP Andy Whitfield, Spartacus will not be the same without you

D
[APPS] HBO GO = a cool sevice you may already pay for.