Although it is debatable just how useful Consumer Reports' surveys are anymore, having their results can at least offer you more information than you already had. They just rated the major U.S. cell phone carriers again. Just as the last several years in a row, things haven't changed much. Verizon still ranks at the top of the heap, while AT&T is circling the bottom of the barrel in regards to customer satisfaction. Sprint came in second, with T-Mobile packing in third.

There was one interesting anomaly in their report. Despite Verizon having the larger 4G LTE Network, somehow AT&T managed to best them with the best-ranked 4G LTE service. That's a cause for head-scratching...


AT&T is Among the Lower-rated, but 4G Service is a Bright Spot

YONKERS, NY - Verizon Wireless was the highest-Rated major carrier in Consumer Reports' annual cell-phone service Ratings, based on a survey of 63,253 subscribers by the Consumer Reports National Research Center.

The full report can be found online at ConsumerReports.org and in the January 2013 issue of Consumer Reports, which is on newsstands now.

AT&T was among the lower-scoring providers, but its 4G LTE network was Rated the most favorably of any carrier. Its users reported the fewest problems with that higher-speed service, which most new smart phones now use.

Consumer Cellular, a national carrier that uses AT&T's network, received high marks across the board in Consumer Reports' Ratings of standard (monthly bill) carriers. The no-frills carrier caters to users with the simplest wireless needs and offers the simplicity of monthly billing without a contractual commitment.

The report found that no-contract plans can be major cost-savers. Two-thirds of Consumer Reports survey respondents who switched to so-called "prepaid plans," which typically lack a contract commitment and bill each month in advance, saved more than $20 a month by switching to prepaid. Those savings can allow wireless customers to quickly recoup the cost of the phone itself, which can be higher if they don't make a contractual commitment.

TracFone was among the top-Rated prepaid providers, receiving high marks for value, voice and text. Like Consumer Cellular, it specializes in those who seek simple, low-cost phone service.

Even those whose phone needs are less than basic can save by going prepaid. "Some smaller carriers that scored respectably in our Ratings and offer low-priced plans, such as Straight Talk and Virgin Mobile, now offer fairly sophisticated smart phones," said Paul Reynolds, electronics editor for Consumer Reports. "And you can even save by switching a phone from a major carrier that's coming off contract to a prepaid plan."
Click to expand...

Not all that suprising on the 4G LTE front honestly. They have a much smaller footprint for their LTE and thus less of a customer base to have negative opinions. You typically get more negative feedback then positive when doing surveys so it only makes sense.

I must live in a bubble where Verizon and AT&T service is pretty much identical where I live. Full bars and LTE service for both. I pick my carrier based on the phone I want, not the carrier. When I got my S3, it was either go with the Share Everything and get 1gig of data or 3gigs on AT&T. The AT&T S3 is unlocked and verizon's wasn't. I have no loyalties with carriers after the contract expires and since they are both unwilling to do any kind of deal or anything, they can bite me. I remember when you could make deals with carriers and get some good stuff. Now if you don't like what they have on paper, they could care less if you go with them.

Wow, wtg Verizon. I have to say that my experiences, their customer service has always been outstanding for me.

As far as consumer reviews are concerned, Consumer Reports should be the most unbiased... and their reputation and tagline is that it is. They do not accept any advertising as a means to ensure that reviews are not biased or influenced and that they are also a not-for-profit entity ensures some accountability.
OP

TisMyDroid said:
Wow, wtg Verizon. I have to say that my experiences, their customer service has always been outstanding for me.

As far as consumer reviews are concerned, Consumer Reports should be the most unbiased... and their reputation and tagline is that it is. They do not accept any advertising as a means to ensure that reviews are not biased or influenced and that they are also a not-for-profit entity ensures some accountability.
Click to expand...

While that is true, I have found that their customer base (from where they draw their surveys) is skewed heavily toward a small subset of older or retired folks. I used to subscribe to their publication, but I have found many of their "results" to be simply not in keeping with real industry trends. This makes their results less accurate overall. Of course, this is just my experience, so I could be wrong.

Yes, you are right and a very legitimate argument on several fronts...the biggest being the population that is surveyed is most likely very skewed and then those most likely to respond to a survey skew it even more. I also use to subscribe and relied very heavily on their reviews for cars, appliances and major purchases. I have not looked at a CR in years, though (tells you a little bit about how much I shop lately, lol).

Well so far I am liking att.

Sent from my SAMSUNG-SGH-I317 using Tapatalk 2

Interesting info and not sure how accurate the info is cuz I was half listening but my son does tech support for at&t and they had a meeting about how they were switching to tiered data like Verizon but they lost a huge percentage of customers or projected a huge loss. He said the revenue they stood to lose was crippling so they are going back to previous data plans. He said that they don't have the huge customer base like Verizon does so they can't afford to lose any percent...they need to gain.

Maybe Verizon will lose enough to at&t's competition strategies that they will rethink their shared data plans. We can hope.
5

I loved VZW when 4G first dropped. Yes, they were the most expensive carrier, but it was well worth it for the service. But now that they dropped unlimited data, and are trying every way they can to force customers into the tiered plans, I lost a lot of respect for their business model. I'm soooo looking forward to Google coming out with their wireless service to hopefully show VZW the err of their ways

On the 4g issue some of us have seen 4g speeds plummet as more and more people climb aboard. When I got my razr the map showed no coverage at the house or work, 4g worked both places. Now my data speeds are pathetic at best. In one year speeds are 30% of what they were.

So, if I was surveyed I would give a low mark for 4g. IMO its not only about building new towers but also saturating existing markets. 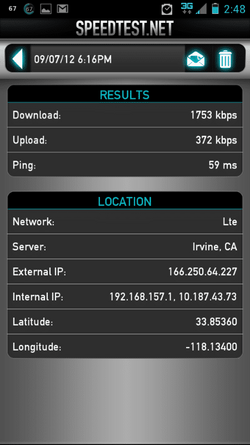 there is a difference between being the "highest" rated, and being "highly" rated. my recall is that cellular companies do not enjoy particularly high ratings/satisfaction overall (compared to other better regarded industries).

I like verizon alright, and their network gives me and the fam coverage in places that I'd otherwise not be able to use a phone, but I wouldnt say I'm particularly thrilled with them as a company - either in their general practices or the way they've treated me. Not pissed either, but a big fat "meh" overall.

Location
On a caboose

Things have certainly changed. I remember when AT&T was the big dog and Verizon was the little dog that started snatching up companies left and right to provide reliable service. For me, that's what Verizon is best at; providing consistent and reliable service. It costs more but I have something I can count on. I wish other companies can provide the same level of reliability at a lower cost because I would jump on it right away. I continue to notice wherever I go I always have strong phone and data service while my friends and family have to wait for a better signal. I'm not in the hills or valleys, just the usual places in the LA and OC counties.

As an aside, a relative bought an iPhone5 without consulting me. She told me about Siri and how it can talk to you. I said "wow, it's really great that Apple can innovate." I could've sworn my phone turned on and I heard Google Now say something about me being incorrect.

Did they also ask the customers serveyed if they knew the difference between AT&T's 4G and 4G LTE? Most consumers aren't aware of the huge difference... I wonder if that could be skewing the results for AT&T's "outstanding" 4G LTE service

4g is an often misused generic term. Verizon had major issues when they first went live that lasted for months of sporadic data outages. It seems, to me at least, they solved the problem by lowering speeds across the board from what they were last year.
As far as overall satisfaction it's like asking do you prefer stepping in dog turds or cat turds with todays pricing, reliability and customer service both before and after the sale.

Support Our Troops!!!
<><
A Rezound phone was used for this Tapatalk post
You must log in or register to reply here.

T-Mobile is Once Again Unprofitable Despite Subscriber Gains