Three Different Processors Will Be Used In The Galaxy S8 We finally have some details regarding the processors that will be used in the upcoming Galaxy S8 devices. It looks like we will have three different processors. It has been speculated that we will see the Snapdragon 835 processor in US variants and that still appears to be the case. What was a bit more surprising is that Samsung apparently plans to utilize two different types of CPUs for the international models.

We will see both the Exynos 8895M and the Exynos 8895V. The higher end M version of the processor will include four 2.5GHz and four 1.7GHz cores. The V version will include four 2.3GHz Exynos M2 and four 1.7GHz Cortex A53 cores. The consumer won't be able to tell the difference between these two new Exynos processors, but why wouldn't Samsung just use the same processors across the board?

The reason may have to do with the modem and mobile data bands, or Samsung may be planning to use the slightly higher end version in the device with the larger display. In the past Samsung has used different versions of Exynos processors in the same version of phone. This could just be a matter of supply. They may not physically be able to produce the mass quantity of the higher end processor that will be needed to support the sales of such a popular device. The consequence would be that they will need to go with the second best processor for the remainder of the devices. Either way it won't make much of a difference. Are these cpu specs enough to make you want to jump to the S8? 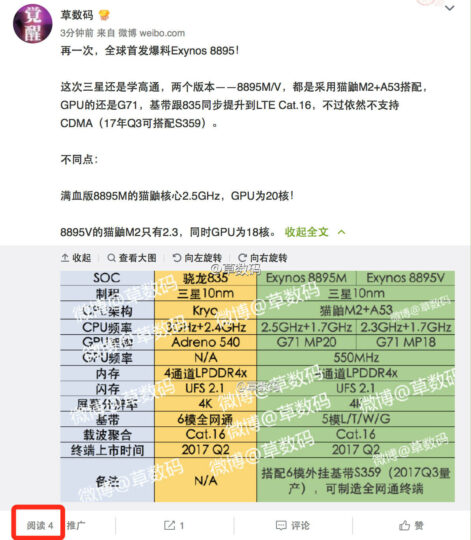 via SamMobile
You must log in or register to reply here.

Both The Exynos And Snapdragon Versions Of The S8 Show Up On Antutu!

Galaxy S8 To Feature 6GB of RAM, and Snapdragon 835