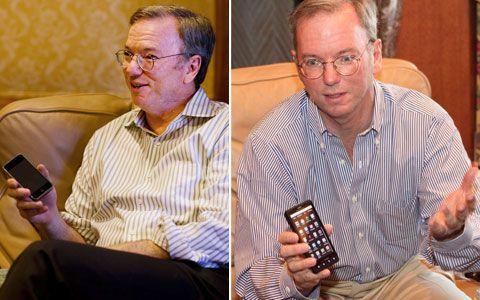 Matthew Staver/Bloomberg News and Nati Harnik/Associated Press Eric Schmidt, chief executive of Google, holding an iPhone in 2008 and an Android phone in 2010.


I’ve seen it a thousand times: Sit down for coffee or a meeting and those in attendance automatically reach for their cellphones and place them on the table. It’s almost like a subconscious signal that says ‘I’ll be sitting here for a while.’


Several years ago, the phones splayed out in front of me tended to be a mishmash of shapes and sizes: flip phones, clamshells, candybars and sliders. But then these phones started to be replaced by something else, a slick phone with a glossy screen, curved black or white back and the precise incision of an Apple logo: iPhones.
Recently, the mobile buffet has been changing again. This time, some iPhones are being replaced by a family of cellphones running Google’s Android operating system.


You don’t need to look at a table full of phones to see the shift taking place. The numbers clearly show that Android is catching on. HTC, maker of the Google Nexus One phone, has seen its profits rise by 58 percent in the second quarter because of the sale of its Android smartphones. And new studies continue to surface showing the rise of Android use on the mobile Web.

Some of this shift might be only temporary. Some phone owners admit that they are just trying Android phones to get a feel for their options, almost as if they are trying to date other people before deciding whether it’s time to break up. But others I’ve asked said they have cut their ties with the iPhone and are locked into a different two-year relationship.


Brady Forrest, conference organizer for O’Reilly Media, said the iPad had enabled him to switch from the iPhone to Android devices without missing out on Apple’s world. “I’ve been increasingly on the fence seeing the new Android applications and the ability to tether my phone,” said Mr. Forrest, “but the iPad really allowed me to make the switch. Now I have my toe in the iPhone ecosystem, but I’m not constrained by the limitations of the phone.”


For others, the AT&T network and Apple’s restrictions on iPhone software have played a role in their decision.


Kuai Hinojosa, Web applications specialist at New York University, said in a phone interview that he still loves his iPhone, but can’t rely on it for business purposes. To solve the problem, Mr. Hinojosa is forced to carry two phones.
“I like the iPhone as a device. As a smartphone it is way ahead of other phones with design, in usability,” he said. “Now I have a Motorola Droid, too, which I use for work because it’s on Verizon and is much more reliable.”


Lee Gonzales, who works with Integware, a medical consulting company, told me that his ultimate decision to jump to Android was Google’s open approach to the applications it allows on the platform. “I’m an Apple fanboy, to a degree, but I can’t support what they are doing with the walled garden surrounding the App store,” he said.


Mr. Gonzales said he appreciates what Apple has done for the smartphone market, but can’t get past the limitations of the applications. “I’m really tempted to get the iPhone, I adore their user interface and industrial design, but each upgrade of Android really keeps me tied to the Android operating system,” he said.


Although the iPhone 4 sold better than any previous iPhone models, the customer confusion surrounding its antenna issues could add another reason to jump into the Android waters.


But any number of variables could change the dynamic of this race. Either platform could become susceptible to a virus that would make customers take pause. Or Apple could add another carrier, offering the iPhone on the Verizon network, which would likely bring many customers back.


But one thing’s for sure: many haven’t made a final decision. Phone contracts usually last just two years, and if a better alternative comes along from either Apple or Android, it’s easy to jump back to the other side of the pond.


If you have switched between Apple and Android, or are actively thinking about it, please share your thoughts in the comments.


Testing the Android Waters - Bits Blog - NYTimes.com
You must log in or register to reply here.

N
Remember that survey I posted? Well the results are in and Android crushed iphone

Even Without iPhone, Verizon Is Gaining