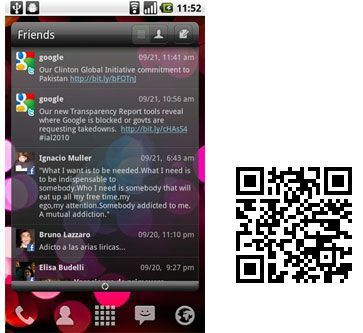 We might as well call it Wild Wednesday with all the updates coming out today! LauncherPro has released an update that fixes some minor issues and packed with a few new features. One of the more notable features is the ability to customize the homescreen grid size. You can now choose how many columns and rows of icons/widgets to have on your homescreens (Preferences > Homescreen Settings). There’s also an “Auto-fit items” option which will resize the grid cell size to match the grid dimensions, so that widgets/icons don’t overlap.

The paid version features a new Friends Widget. This is the last promised widget in the LauncherPro Plus series (Note: there *will* be more widgets in the future, after making some improvements to the current widgets). The Friends widget blends Twitter and Facebook updates into one widget. If you’ve used the individual widgets, then you already know the drill. There’s a Timeline view (with your Twitter timeline and Facebook news feed) and a Wall view (with your Twitter mentions and Facebook wall). A third view might come in a future update with Twitter direct messages and Facebook inbox. Since the Facebook API doesn’t support sending direct messages, those would be read-only, with no way to reply from the widget.

Some of the issues fixed include:

Launcher Pro is available through the Android Market or the APK file can be downloaded directly from LaunchPro.com with the following link: http://www.launcherpro.com/apk/LauncherPro-0.7.9.0.apk

I may be the only one but I can't get it to install.
OP

Hmm.. I just installed it with no problems.. Can you give us any other details?

Works fantastic on my Droid.
The two applications I cannot do without are LauncherPro and swype!
You must log in or register to reply here.