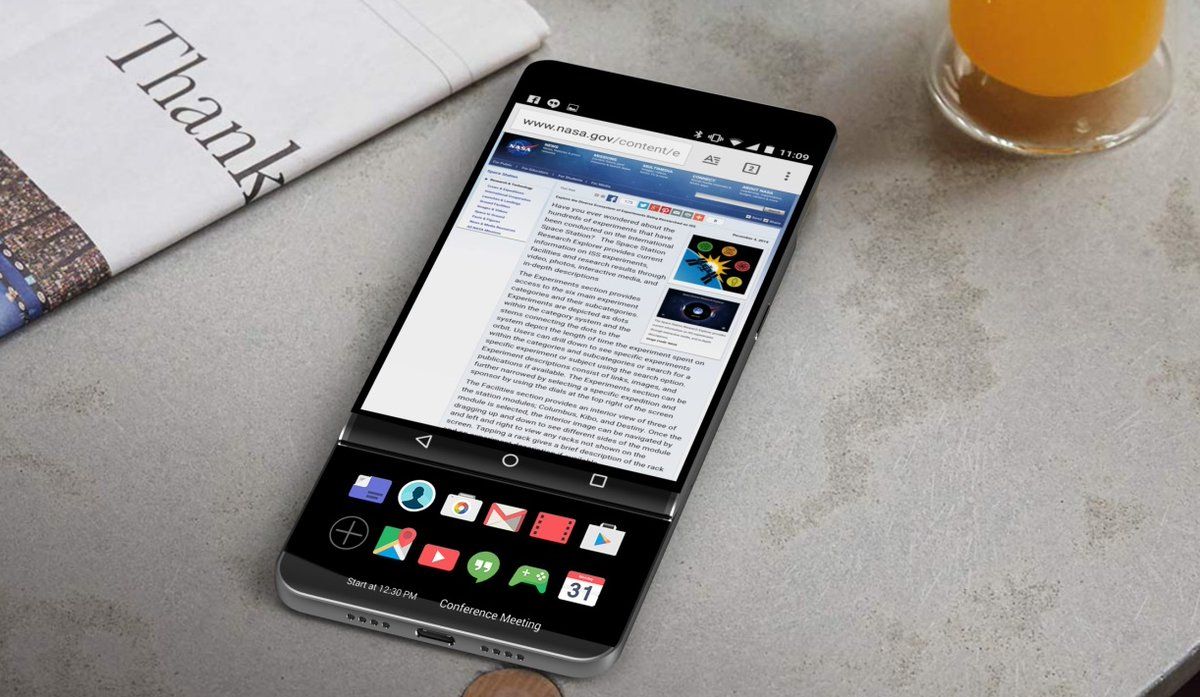 LG's V series is known for being larger and sturdier than the rest of LG's lineup. One of the standout features of the V series has been the secondary display. In the V10 and V20 this has just been a small display that sits over the top of the primary display. The display is only useful for notifications, time, date, and a few other things. It looks like LG may be taking the secondary display to the next level for the LG V30.

Today well known and deadly accurate leakster @evleaks tweeted a bunch of renders that he says is from an early mock up of the LG V30. He also went on to say that he was not sure if the V30 project was still heading in this direction. The renders feature a slide out second display that can be used for all sorts of things like a keyboard, recent apps, dialer, camera controls, and more. I am not a fan of this design. LG has took a big risk like this with the LG G5 design and that did not turn out well. I am hoping they will learn from that. There was an earlier leak that showed a secondary display that wraps around a center placed front camera and speaker. That would be a more preferable option in my opinion. What are your thoughts on this design?

IF they set it up properly and it's not ridiculous to hold... I could see this being pretty cool... also seeing the embedded fingerprint scanner... probably won't make this device but the V40 hopefully will have it...

I do sometimes hate the second screen... I can't tell you how many times I've meant to slide from the top to open my notifications while on the phone and instead ended the call... or if the phone is locked but the screen has turned on a phone call and I try to access a quick dial contact it won't let me select call until I unlock the phone...

my favorite is when I'm getting an email and the damn thing starts spamming my second screen with all the unread messages and then suddenly my gmail is opening like 6 different messages and freaking out... I've actually thrown my phone over it a few times...

otherwise I do really enjoy it and could see this working out if done right... waterproof LG... that's all I have to say.

The "second screen" is definitely in a better position, but this seems really gimmicky...which like you said, is what tanked the G5 so badly. It's nice that it's at the bottom though, as it's much easier to reach with one hand than when the screen is at the top.

What I'd rather see, is them switch to AMOLED screens so they can run a screen off mode that still tells time and shows notifications without chewing into the battery very much. The G5's system was actually pretty nice for this, even though it meant leaving one of the 3 lights that lit up the screen was always on. I'd like to see the exact same functionality, but with AMOLED, and just have them ditch the second screen idea altogether. Especially if they gave the option for custom buttons like on the V20, such as turning on the flashlight from the "off screen", etc.

Not too keen on this. I can see the bottom screen getting scratched from stuff being in there when opened and closed. Also, this doesn't seem very case friendly. I like mine protected.
You must log in or register to reply here.