My Notes In Gear App Review

Another update to this app has added the ability to change the order of list items, changed the overall home screen look to a darker gray (which I prefer over the sunset yellow) on the phone part of the app and the ability to insert a drawing or photo instead of just a photo, also phone side only.
On the watch side sync times are faster and the occasional sync failure has been addressed and, so far, seemingly eliminated. 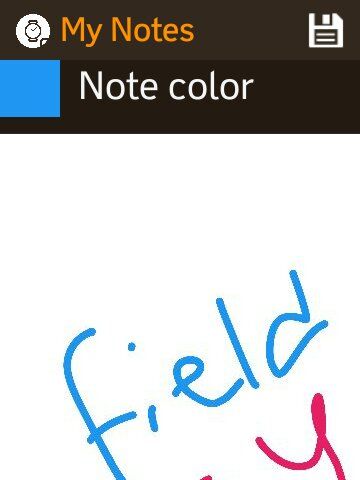 The icon for the app has also been changed from square to round.

A new update is out for bug fixes. The only bug I'd had with it in months was sync with Dropbox on caused it to not sync between devices but an update to the Dropbox app fixed that a few days later.

Months later another update. I'm not sure when this developer will eventually stop updating this app but there was 1 released on Feb23 with bug fixes, font tweaks and a few other goodies.

This app is making my watch relevant again beyond being a butler on a daily basis because when the 2 yard men are building packs of engineered wood products I often will pull the hardware for them and making a list on paper when the weather sucks is more cumbersome than doing so on my watch or phone. I just make the list as usual and use my watch to check items off as I pull them like in this small example
On phone of all pulled

On watch showing I'd pulled first one

All lists before opening any on watch. Only 2 lists at the moment,1 honey do and 1 work

I'm gonna mess with it some this week to start using it to make my load lists for trucks and get away from pen/paper there as well to save me time from having to go inside and get the lists from the board, just have the dispatcher radio me them instead. I'll post back some screen shots of jotting down things in a quick memo from s pen and copy/paste into My Notes.

Google Calendar To Do Lists.
2

All In One app for Gear S .