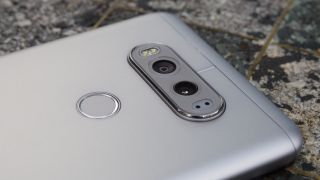 LG just announced their latest flagship the LG V30 at IFA in Berlin! This has to be one of the most exciting flagships of 2017 with an all new design, 6" POLED display, best in class dual lens camera setup and more. One of the main selling points that LG V30 is the f1.6 main camera lens. This would be a pretty big improvement over the f1.8 main lens on the G6 and would make a pretty big difference in low light shots. Pre-production units are in the wild right now and the camera is being tested. Some of the first camera samples indicate that the main lens is actually f1.69 and not f1.6 as pointed out by Russian blog Technot. They inspected the exif data from images posted by Phandroid and GSMArena which show the aperture is indeed f1.69.

This would mean that LG ignored the hundredth digit entirely instead of rounding it up to f1.7 to seemingly boost the stat sheet. This claim would put it ahead of other flagships that have f1.7 although when compared to photos taken by those devices like the Galaxy S8 the LG V30 does seem to perform better in low light. Hopefully the incorrect f number found in the exif data is just due to early pre-production firmware. I guess we will see if LG decides to clarify.

interesting. I guess we will see when the phone actually arrives.

What ever happened to Truth in Advertising? We shall see once its Launches in the Customers hands. Personally im still sold on the Note8. Im hoping these New Phone do well though since it may make Samsung get Creative with Promos come holiday time like when i got my S6.

It may not be 1.6 but I guarantee this camera is the real deal ....seeing some positive reviews and it seems LG keeps improving ...

Yes, the LG V30's camera really does have an f/1.6 aperture
You must log in or register to reply here.

LG Will Announce The V30 In Just A Few Hours! You Can Watch It HERE!

The V30 Will Have Best Low Light Camera Performance On An LG Phone!

LG V30 Used By Game Of Thrones Cinematographer In This Video Shoot!