It seems the United States Federal Trade Commission takes a stand stating "‘unlimited’ means unlimited." They finally decided to put their foot down on some of the sneaky ways that US carriers have been hampering Unlimited Data customers. FTC Chairwoman Edith Ramirez is accusing AT&T of deceptive advertising and violation of the FTC Act because they throttled 3.5 Million customers who signed up for "unlimited plans."

AT&T promised its customers ‘unlimited’ data, and in many instances, it has failed to deliver on that promise. The issue here is simple: ‘unlimited’ means unlimited.
Click to expand...

The main compliant is that AT&T' failed to inform customers that their "unlimited data" could be "throttled." A few customers even had their data speeds cut by up to 90 percent. Here's another quote with more of the details,

According to the Commission's research, AT&T has throttled approximately 3.5 million customers on more than 25 million individual occasions since implementing the system in 2011. AT&T no longer offers unlimited data to new customers, but many users avoid signing new service contracts (and receiving lucrative subsidies on new phones) in order to maintain their unlimited status. AT&T's official stated policy is that unlimited data users will see reduced speeds after using 3GB of data on 3G, or 5GB of data on LTE, in a single billing cycle. Before March of 2012, the vague policy affected only "the top 5% of users," and individual users had no way of knowing when or if they had hit a limit.

Despite various communications directly to the technology press, the FTC says that AT&T violated the Act when it failed to inform users that their unlimited lines were in fact severely limited in speed in some situations, even as these customers renewed their contracts and bought new, discounted phones (which was an option for a while). The Commission says that aggressive data throttling often reduced speeds for individual users by 80-90%, making it difficult to use even basic services like GPS navigation. While not accusing AT&T directly, the FTC notes that customers considered this a "bait and switch" tactic, and some customers were charged early termination fees after leaving AT&T due to poor service, without being told that the terms of their contract had been changed. ~ AndroidPolice
Click to expand...

What's interesting about this case is what sort of precedent it might set. The other carriers could be just as culpable as AT&T. Will the FTC go after Verizon, T-Mobile and Sprint next? Will this open a door allowing them to go after cable companies for throttling users. Ultimately, it will come down to whether or not customers were adequately informed by the company of any throttling issues. Regardless, it's great to see someone calling out these companies for their heavy abuse of the word "unlimited."

Now we know why Big Red backed down.

Indeed. T-mobile may be covered as their recent plans have one specific offering with unlimited 4G data, but they did throttle users in the past as well, so I guess we'll see if they face any backlash. Even when the contract is up, you still must be made aware of changes to service. Neither you nor the carrier are obligated to continue at that point, but both parties should and are allowed to have informed consent in terms of the relationship remaining intact. Glad to see Washington has remained serious in regards to this and device unlocking.

Hope ftc hits them where it hurts. A billion dollar settlement spread between all unlimited users sounds fair to me.

LoneWolfArcher said:
Now we know why Big Red backed down.
Click to expand...

I dont know if they did, Ive recently had to open a case with the BBB against verizon, because despite Verizon saying they wont throttle, my speeds have gotten insultingly slow. They replaced my device twice, then said it might be an error in the sim card. All of which were (from my perspective) never the issue. I opened up the case a month ago and my speeds have yet to change, with exception right after I get off the phone with a rep. I know I cant be the only one, Ive attached my speeds. They've done numerous remote tests, network area tests, and have sent engineers out into the field to diagnose the issue. No resolve. The rep I am speaking to is however really nice (maybe because he has to be if hes the rep that Verizon asks to handle their BBB cases). Im hoping to resolve this soon. 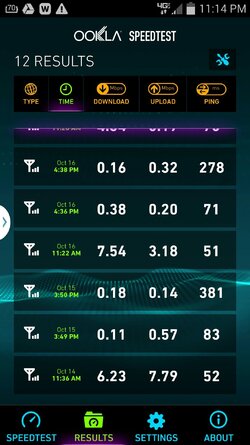 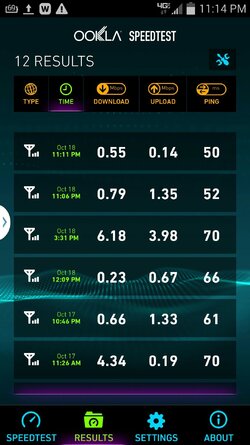 xeene said:
Hope ftc hits them where it hurts. A billion dollar settlement spread between all unlimited users sounds fair to me.
Click to expand...

I don't think there will be a huge settlement besides most most of the time you see these and there's a fine and a slap on the hand and very little if any to the users.
OP

AT&T has since responded to the FTC lawsuit. Here's the quote and source link:

Not surprisingly, AT&T isn't happy. It claims the FTC's lawsuit is "baseless," and maintains that it has been "transparent" about the entire affair between press releases and bill notices. Also, it notes that "only" 3 percent of customers are affected, and they get a text message when throttling is a concern. While it's definitely true that AT&T has discussed throttling out in the open, that doesn't address the FTC's concerns about telling customers exactly how unusable their service can get -- or the complaint that in-contract customers were promised one thing and got another. Also, 3 percent of 55.8 million subscribers (as of the third quarter) still adds up to roughly 1.7 million, so there are plenty of people directly affected by these policies.
Click to expand...

ATT will settle with the FTC for some paltry amount and call it done.

I have never before seen 3G show up on my phone at home but ever since VZW threatened to throttle, I have been seeing it almost daily, to include today. Who says VZW is not throttling?

I say, I've burned through more gigs then you can imagine and not once was throttled. If I'm not in top 1% of data users I don't know who is.
I used to connect multiple Pcs to my phone and seed torrents all day burning hundred of gigs a day. Prior to doing that I would call vzw and ask them if there would be a problem with me doing that and they gave me all clear.
K

Vzw don't care about us, we are so miniscule it's no longer worth their trouble. Bad pr would hurt them more.

I recall people noting that they had been throttled on multiple occasions over on XDA, but I don't recall anyone ever stating that they had received a text to notify them in that regard. It got so bad for some that they took AT&T to court over it. The company has been anything but transparent.
You must log in or register to reply here.