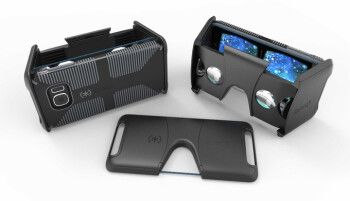 ​
Virtual Reality is a huge theme this year at CES. You can expect to see all sorts of variations on Google's Cardboard product, as well as some fully immersive high end VR headsets. HTC is once again demoing their Vive headset which is said to be one of the best out there. The consumer version of the Oculus Rift will finally be available for purchase soon, and Samsung is sure to have their Gear VR on display at CES as well.

One of the early stand out VR headsets is actually a phone case! The Speck Pocket VR is a protective cell phone case that doubles as a Google Cardboard Style VR headset. It was unveiled earlier today. Other than being shown off today their aren't many details surrounding this accessory in the way of price, availability, and release. Hopefully we will find out more of the details as CES progresses.

Thats neat but kinda useless. I loved Cardboard when I got one but the novelty wore off faster than it drained my phones battery life. I'll wait to see what HTC has to offer as well as the final Oculus product.

Yeah. Cardboard is fun to play with here and there, but I can't say I'd want a bulky case to carry around just in case I wanted to use it. I also can't see how this will provide as immersive of an experience as the traditional Cardboard products. Those pretty much block out all of the light around you. This is wide open. I feel like the glare of overhead lights could take away from the experience immensely.

If you look at all of the other VR headsets, they all block as much outside light as they can.
You must log in or register to reply here.

The Oculus Rift VR Headset has started to ship!