Oh how the mighty fall sometimes. Sony was once one of the most untouchable, powerful and profitable companies on the planet. Now, they are struggling to survive. Moody's, the credit rating agency, just announced they are downgrading Sony's credit rating to "one step above junk." They also added,

“Without robust restructuring in the coming 12-18 months, Sony’s non-financial services businesses will at best achieve roughly break even, and are also at risk of remaining unprofitable.”
Click to expand...

To put it in perspective how bad things are for Sony, just this year they had to combine forces with their competitors, Toshiba and Hitachi just to be able to create competitive LCD TV products. They have been getting hammered by better technology from Samsung and LG. Sony TVs were once the "de facto standard" for reference designs, yet now Sony's R&D is so behind they have to form alliances with their rivals. Do any of you guys remember the old CRT Sony Trinitron TVs? I remember having one that was over twenty years old and it still had a perfect picture.

Sony's fairly new (seven months in the position) CEO, Kazuo Hirai, is now focusing the company's resources on digital imaging, gaming, and mobile. Will he be able to turn the company around? Only time will tell.

Sony makes decent electronics but the user interface has suffered dramatically since the late 90's when they began trying to protect their entertainment copyrights through their devices.

Anyone remember the amazingly awesome minidisk mp3 player? You had to "check out" your music from your PC's "library" onto the minidisks and couldn't play them on your computer 'til you checked them back in. Fantastic hardware. Absolutely sucktastic implementation...
S

Oh how the mighty have fallen!
Sony, Intel, Microsoft and Cisco were the Titans of the 90's.
Look at them now.

why yes i do remember the Sony Trinitron TVs, mainly b/c there is a 36" one sitting in my living room that i have been wishing for it to die so i can finally go HD... oh and I have a 27" one in a spare room that has followed me through 3 years of moving in and out of dorms, 2 apartments, and now a new house and the thing is still kicking and looks great.

I think the pinnacle of Sony's design was the black and yellow sport discman, the only portable cd player that i have ever owned that did not skip at the slightest movement. 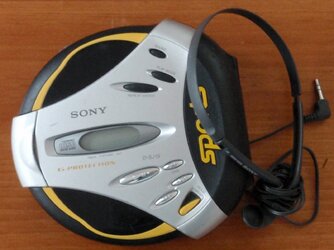 I hope I don't have to give up on the Playstation in the coming years...not ready to go with an X-box. Their other items in the electronics are just over-priced for something with the same specs in a different brand.

Narsil said:
Anyone remember the amazingly awesome minidisk mp3 player? You had to "check out" your music from your PC's "library" onto the minidisks and couldn't play them on your computer 'til you checked them back in. Fantastic hardware. Absolutely sucktastic implementation...
Click to expand...

Man, I still kind of love my old MD player. The hardware really was fantastic. Unfortunately, shortly after I got it, I switched to Linux. The only way to get new music on the disks then was to record them manually... like recording on an old cassette. It was totally worth it, though! ...At least, until I got a proper MP3 player (which has since been replaced by an Android phone).

Of course, their horrible software for the MD player was nothing compared to their CDs that would install rootkits on Windows PCs....

Even though I do really like the Playstation line of console (and handhelds), remembering that fiasco makes me think that Sony really does deserve to go out of business.

Sony has been going downhill for years now. I remember a few years ago I did a case study of them for a management class. They really have to get stuff straighten out or they'll be bought out by another company.

You win some, you lose some: Has Sony learned its lesson on proprietary formats yet? – Telegraph Blogs

Sony lost with CD's vs. Minidisc, but won with HD-DVD vs. Bluray.

This is what happens when innovation is replaced with improving of someone else's ideas... ahem ahem Apple...

I wonder if Apple has patented "fall from supremacy "? If so they'll be suing Sony. They're next to fall

Support Our Troops!!!
<><
A Rezound phone was used for this Tapatalk post

Proprietary storage did it for me. I once bought a Sony camera, which of course only used those horrid overpriced Memory Sticks.

Adapt and survive, or slip into oblivion.

Yeah, it was a shame that Sony did that mess with the memory sticks only to allow both sticks and SD cards once they realized the battle was lost.

akhenax said:
You win some, you lose some: Has Sony learned its lesson on proprietary formats yet? &ndash; Telegraph Blogs

Sony lost with CD's vs. Minidisc, but won with HD-DVD vs. Bluray.
Click to expand...

I was less frustrated by their proprietary memory sticks as I was their proprietary video files. I should not have to run a file reformatting program to get digital videos from my digital camcorder's HD to play on a computer. That's just stupid software encoding crap to force you to purchase an additional piece of proprietary Sony editing software that should have come with the camcorder or not be necessary at all.

What We Want To See In The Galaxy S6

Vzw is on top of android updates

How to be safe, find trusted apps, & avoid viruses - A guide for those new to Android
2