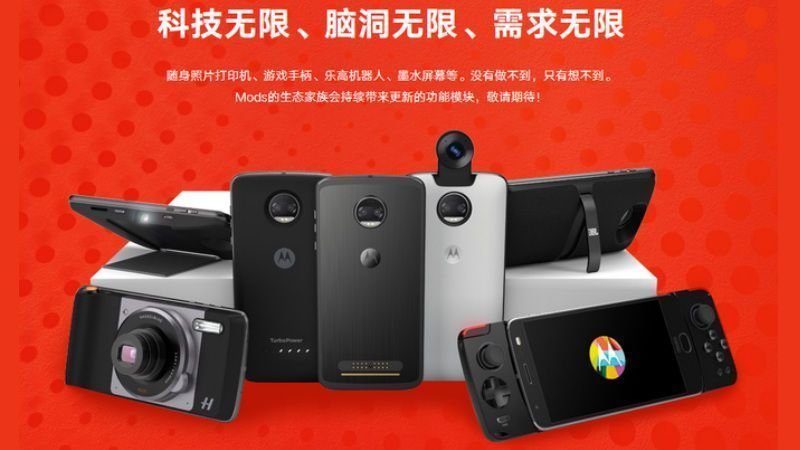 The Moto Z2 Play has already been announced but we are otherwise patiently waiting to hear from Lenovo about the Moto Z2 and Moto Z2 Force. We now know what the phone will look like along with some of the mods that will be available at launch thanks to a new leak direct from Moto! These devices are expected to be announced at an event on July 25.

The official website posted an image of the Moto Z2 briefly. The phone is much like the Z2 Play with moto mod support and a dual lens camera setup on the back. The phone is also expected to feature a 5.5" QHD AMOLED display, Snapdragon 835 processor, 4GB of RAM, Android 7.1.1 and should be on par with devices like the Galaxy S8 when it comes to performance. This looks like a pretty great device and if you are in to moto mods this may be the device for you.

LOL. Came here to say that.
Since we've already clearly seen this leak from Evan, I still don't think it's front page worthy. Or maybe just to confirm Evan was right.

with all the mods that phone could break the bank. as far as being newsworthy, I guess it depends on who is interested. I mean look at all the releases for the note 8 and they are creating headlines

me just sayin said:
with all the mods that phone could break the bank. as far as being newsworthy, I guess it depends on who is interested. I mean look at all the releases for the note 8 and they are creating headlines
Click to expand...

That's true, if someone at Samsung sneezes near a possible Note 8 it will be a major news story and we will have an article with pics posted here within minutes.

My Moto Z Force with 3 Moto Mods was still quite a bit cheaper than the rumored Note 8 price, so that's a good deal in my book.

The Moto Mods can be expensive, but there are sales all the time if you can catch them. One of the awesome things about the Mods is that we don't all need every Mod, so it doesn't have to "break the bank". I don't watch a lot of movies, so will never buy the projector, but someone that loves movies might really enjoy that one. I listen to a lot of music, so the JBL Soundboost was perfect for me, and I use it a lot. Folks that don't listen to music very often might have little use for that Mod.I travel a lot for work, so the Incipio Battery Mod just made sense, it's always in my backpack & always nearby if I need extra battery; no worries about finding an outlet and plugging in. My wife is a semi-professional photographer so the Hasselblad camera made sense for her & she loves it. It was free with the purchase of her phone, so another good deal. I don't really play games so the new game pad Mod would be a waste of money for me personally, but I can see that one being a huge hit with folks that like to play games on their phone.

That is the beauty of these phones you can customize them with mods that fit your needs. I bought the Hasselblad Moto Mod for when I was on Vacation. The Zoom came in handy. I have the JBL Soundblaster from Launch Promo and it's cool but was never impressed with the Volume. I have the Incipio Off grid 2200mAh Mod which came in handy when I was on Vacation and out all day. I like the newest Battery Mod. Bigger and can be charged independent of phone with charger although the Incipio can be charged by itself with QI charger. Maybe if the 2nd Gen is more available to public on other carriers it will pickup more success leading to more Potential Companies making awesome Mods or maybe somewhere down the line we can see a more universal Modular System for multiple Phones which would be interesting.
You must log in or register to reply here.