My first post on this forum!
And it is to advertise something... :blink:

I have been developing an Android-game with a friend of mine for the past few weeks, we called it Kurves.
It's (in my humble opinion) the first decent "Achtung Die Kurve!" (or "Zatacka") game for Android.
Up to four players can join the game, in which you will have to stay clear of the borders and the other aliens.

Well, enough chitchat, I'll post the link and some screenshots!

The free version can be found here: https://play.google.com/store/apps/details?id=com.hektorapps.kurvesfree.
You will find the full version eventually, if you like our game. ;-)

If you have any suggestions, or bugs, feel free to post them! We will certainly take your opinion into account.

----------------
Join the fight with the other aliens and claim your planet!
Kurves is a trembling and addictive multiplayer game in which only 1 player can survive. Grab your chance to be one of the aliens and show your friends who’s the boss on the flat planet!

BATTLE FOR YOUR LIFE!

In Kurves, you get the chance to be one of them and you’ll have to fight to survive! Kurves is a trembling and blinking interpretation of the classic “Achtung die Kurve!”, “Zatacka”, “Zakutry” or “Cervi” game originally made for DOS in 1993. Up to four players can join the battlegrounds and settle who will be the almighty ruler of the planet! Turn left and right, dodge your enemies and block other aliens paths to free yourself some space! Race to be the first on a spot that might give you the victory! Stay clear of the abyss, or suffer a painful death in the silent depths of outer space…

POWER-UPS (only for the FULL VERSION, find it in the Play Store!)

Ever imagined to possess superpowers? Grab the coins to improve your alien and let your opponents pray for mercy!

» Golden coin «
Gain extra points! You will receive a bonus depending on the amount of players that started the game.

» Invincible «
INVINCIBILITY! The mightiest of power-ups! You will be able to pass through other snakes without dying, allowing you to obtain the higher ground.

» Cloak «
Put on your invisibility-cloak, and activate stealth-mode! Your alien will be nearly invisible: a real trap for the other aliens.

» Cutoff «
Clear some space on the planet by cutting off the tails of the aliens! When crossing another player, the backside will vanish into space dust.

» Bomb «
Warning! This will eliminate your own alien! However, you will receive 1 point for being a hero and sacrificing yourself. And of course, extra points for every other player you drag with you in their death.

» Random «
The random power-up will give you one of the 4 forces, or it might be a boobytrap! When the bomb goes off, it will eliminate you, but also the others around you. You will get points for these aliens!

Kurves is played best on a tablet. It will run without problems on smaller devices, but please be aware that this might affect the gaming experience. We also suggest you to report your ideas, suggestions, wishes, desires, crashes and bugs via e-mail to hektorapps@gmail.com instead of posting them in the comments. We will be able to solve your bugs faster this way.

NOTICE
* There is also a paid version of Kurves available in the Play Store. The full version is completely ad-free and includes power-ups!
-------------- 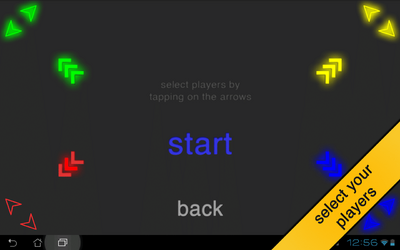 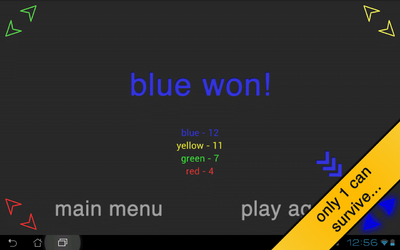 We are currently at version 1.0.4 which fixes some very small bugs! :icon_ banana:
OP

There is a big update coming up next week!
We will add power-ups to the game...

What kind of power-ups would you guys like to see implemented? We have some unique one's so far, but I'm sure there are more possibility's!

New update!
Version 1.1 adds power-ups to the game (full version) and adds "spaces in aliens" to the free version.
Also, the game-engine has been optimized.

And the Google Play text has been updated! (see first post)
OP


How do you mean? Does it forceclose? Or does it just freeze?

If you have the option, we'd appreciate it if you could report the crash. We can then try to fix this!
If not, then please post the details of your device.
OP

Update to version 1.1.3:
- Added a pause-menu. This can be activated by pressing the back-key.

One last post on Kurves, we are working on our next game at the moment!

Some new versions have been released.
A new freeze power-up has been added, and you can now unlock the invincibility power-up in the free version!
We also got rid om some bugs.
R

Many thanks for your important post. I would like to suggest that Please keep continue it more and more. I will always visit this site regularly.
J

Kurves is very interesting game and here you have shared really amazing game with us. I have played this game with multiplayer and there was really great experience for me and we enjoy a lot.
You must log in or register to reply here.