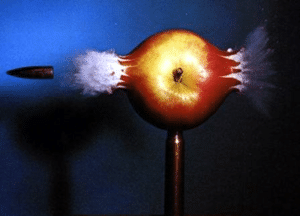 
This wanton destruction of gadgetry is not as uncommon as one might imagine. Take a wander round YouTube and you’ll find dozens of such examples, like this great slo-mo of an iPhone getting it from a .50 round or this one of an iPad getting toasted with oxyacetylene torches.

​
I found it heart warming at first to discover that the majority of these ridiculous acts of vandalism were aimed at Apple’s products. ‘Men after our own hearts’ I thought, and although the BlendTec clip is well made and deliberately comical, most of them weren’t. They lacked imagination and left me feeling glad I didn’t live next door to the people that made them.
I searched for artistic merit, determined to justify my fascination, but found none. The focus on Apple, I decided, was nothing more than a crude attempt to piggy-back on the publicity that Apple’s products generate, and just like porn, it left me feeling dirty and ashamed.


Cheap laughs aside, I reasoned, its much easier to destroy something than it is to create something, even an iPhone – and after all… people died making that handset.

[video=youtube;fLreo24WYeQ]http://www.youtube.com/watch?v=fLreo24WYeQ&feature=player_embedded]YouTube - Will It Blend? - iPhone 4[/video]

I remember when the 360 came out and you couldn't find one anywhere, some dude did a video of one being all smashed up.
You must log in or register to reply here.

Jimmy Kimmel gives people 4S, asks how they like the "new iPhone 5"

D
I got a chuckle out of this... Will it Blend?