Verizon sneaks the Droid inside Magazines 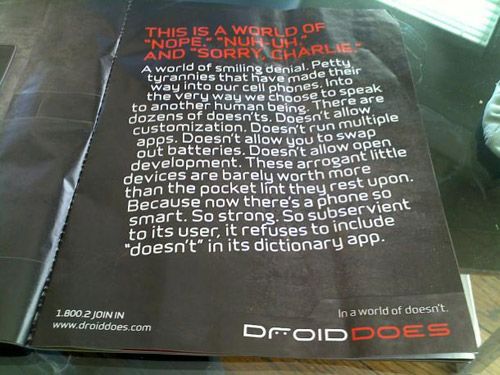 Verizon continues the shock and awe advertising campaign with a new magazine ad in the latest issue of Sports Illustarted. Similar to the very first Droid TV commercial, it's aimed directly at the iPhone and what it "doesn't" have or do. CNet takes it a bit further and believes this could be a personal attack on the King Apple, Steve Jobs. Could the title be words used in latest of ongoing negotiations between the two companies trying to create a new relationship.


"This is a world of “nope,” “nuh-uh,” and “sorry, Charlie.”​
A world of smiling denial. Petty tyrannies that have made their way into our cell phones. Into the very way we choose to speak to another human being. There are dozens of doesn’ts. Doesn’t allow customization. Doesn’t run multiple apps. Doesn’t allow you to swap out batteries. doesn’t allow open development. These arrogant little devices are barely worth more than the pocket link they rest upon. Because now there’s a phone so smart, so strong. So subservient to its user, it refuses to include “doesn’t” in its dictionary app.

Verizon must be on iPhone forums searching for complaints made by members, because they certainly hit the nail right on the head by addressing what iPhone doesn't have or do. Is it time for AT&T to fight back with a similar commercial to auto-focus (or not) on the Droid's weakness? Is this a good approach for Verizon to take? Let us know your thoughts..

Reading that gave me chills. You don't often see such direct bashing in advertising. I love it!

Its about time Verizon wakes up. AMAZING advertising!!!

They are really going on the attrack. A frakking full page add in Sports Illustrated is a bold move.

Plus all the thrashing of the lack of coverage. This is what shock and awe is all about.

All out aggresive marketing. Good stuff.

As a VZ employee, I am wondering WTF took them so long. At least with the 3G campaign. Obviously, they couldn't do a "Storm Does" campaign, so the iPhone bashing had to wait until they had a phone that could stand toe to toe with the Jeebus Phone.

So, as long as they were going commando on AT&T's network shortcomings, may as well make it a duoble-whammy by attacking AT&T's signature device, since the Droid is aimed squarely up its poopshoot.

I am glad that Verizon has turned a corner and is allowing open development on their network. It just seems ironic to me how Verizon is attacking the competition with works like tyranny when most people still think of crippled and locked down when thinking of VZW.

BigRed79 said:
I am glad that Verizon has turned a corner and is allowing open development on their network. It just seems ironic to me how Verizon is attacking the competition with works like tyranny when most people still think of crippled and locked down when thinking of VZW.
Click to expand...


Yeah, VZW's total lockdown and even neutering of so many otherwise very capable phones has driven me insane, both as a customer and an employee.

That is a great ad! I think it's about time to take thier shots. The best network and maybe the best device out now combined. Added to that Apple and thier silly ways. Nice going by the marketing team and the board or CEO who has approved these ads!

I'm glad some one is finally trying to stick it to the iFruit and their Evil Empire minions. I like Verizon finally doing more than paying lip service to openness (for years their practice of neutering their phones and the decidedly proprietary chargers kept me from getting anything more than the most basic possible phone available), let's just hope they can keep it up and that for once the leopard's spots really are changing.

Motorola gave us the Startac "StarTAC was unveiled in North America on January 3, 1996.[3] Then the smallest cell phone available, this AMPS phone was an immediate success. Successor TDMA and CDMA StarTACs were equally popular. GSM models were available in North America through Powertel, VoiceStream and other early GSM carriers. StarTACs remained popular until the early 2000s, appearing in many Hollywood movies of the period such as 8mm starring Nicolas Cage. Many MicroTAC owners switched to this particular model due to its compact size and light weight.
During its initial launch, magazine ads for the phone would include an actual size cardboard rendition that could be pulled from the page to demonstrate the diminutive nature of the device.
The sleek Motorola StarTac mobile phone was introduced at the price of $1,000— at a time when many mobile phone makers started giving away their products in return for user subscription fees"


Now they have done it again and given us the DROID!

In Verizon’s reponse, the company says that “AT&T sued because Verizon’s ads are true and the truth hurts.”
Click to expand...

Please tell me that I am wrong. My understanding is that Verizon blocks bluetooth transfer of the contacts, pictures, wall paper and music... The phone is commpletely capable of this, but it is blocked in the Verizon phone at the request Verizon... Can anyone tell me if AT&T allows this trype of transfer with the iphone or is it also blocked by AT&T...?? What about T-Mobile phones... also blocked?
B

Reading that advertisement made me feel all warm and fuzzy inside :motdroidvert::heart:
D

I love it!! But that's mostly because I was never a fan of Apple and any of their products although I did own an iPhone for a while.

But even if I was a big fan, I have no problem with this direct, no holds barred approach. I find people tend to apologize for the iPhone's obvious shortfalls all too often, and are quick to jump all over the competition. It's about time they get put in their place.
You must log in or register to reply here.

K
New droid for me