If you’re a city dweller such as myself, you know I can’t stress enough the frustration of searching out a parking spot, or — worse yet — admitting defeat and forking over unspeakable sums of money to plant your wheels for a few hours. My best bit of advice for you: get a bike. But if that doesn’t float your boat, Google Labs just launched a helpful Android app that could make finding that coveted spot so much easier. 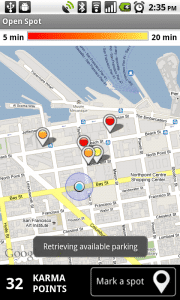 ​
Open Spot is simple in concept. When leaving your primo parking space that you spent thirty minutes hunting down if you feel so kind you can place a pin on a map identifying where the open space now remains. Other users looking for a place to park can see all available open spaces on the same map, color coded to show how long it has been since the spot was first left open. Is a feeling of self-righteousness and charity not enough to get you to mark your old spots? Google has added in a “karma” points system to up the value of playing along. How exactly these karma points benefit you in anyway is unknown. They sure as heck don’t unlock better parking spaces.


While the app is in its infancy you probably aren’t very likely to see many labeled spots on the map, but don’t let that discourage you. The more people who join in on Open Spot the better chances there are of it becoming a great solution to an irritating problem. Of course you have to wonder how accurately marked the spaces are considering GPS does have room for error, as well as people not using Open Spot who happened to scope out the space before you. Will this app eliminate parking frustration? Doubtful, but it will at least give you something to do while looking for that space. Check it out at the Google Labs page now.


phandroid.com
Last edited: Jul 9, 2010
You must log in or register to reply here.