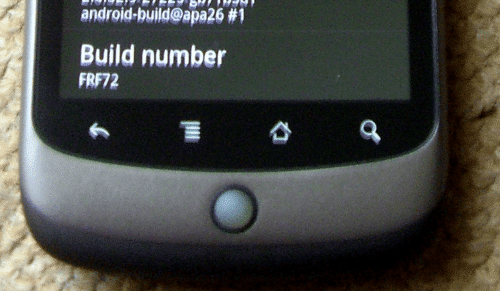 ​
After the announcement of Froyo, or Android 2.2, we have all been jumping up down giddy with excitement curious as to when we would all receive the OTA. Everbody knows that Google works hard to provide us with updates that pack a lot of punch as fast as they can. But with no release date announced people are left growing anxious while they wait for the next big update to hit their phone. There is good news though, it is possible that the release date is even closer than we otherwise thought. Now, this information is just a rumor so don’t take it as fact. Sizzled Core, where this rumor originated, claims to have received the update over-the-air. With the original article they also posted an image that shows us a different Build Number, FRF72. Now this is strange, because of the fact that the Froyo Google first released was FRF50.

Understand that this image can very easily be faked, there are in fact a number of ways. The first way everyone thinks about when looking at a faked image is Photoshop. The second way, and I believe is much more likely in this case is to modify the build.prop. Its relatively simple, and if one wanted they could flash a modified build.prop which would then display a Build number of their choice. Even with the chance that this could be a fake, there is other evidence which may prove this to be real. Michael Gross, a Google tweeted about receiving a new OTA. Interestingly the tweet was deleted. What we have so far is Sizzled Core claiming they received an OTA which may or may not be real. We also have Michael Gross tweeting to his followers that he also received in OTA. It is safe to say, that Google is definitely working on Froyo and that Michael Gross did in fact receive that OTA. We just have to wait and see what Google has for us, sooner or later we will all receive it.

If it was sent OTA can any other Nexus owners confirm? Have they?
T

its supposed to still come this month for the droid, right?

Cool, so for instance. I used the manual update on my non rooted droid. Would I still receive this update?
OP

I hope/assume so cause I did also..

I believe you will since it is not the same Build but it is a possibility that you wont receive it because it will think you already have 2.2 on your phone.

TIA!
You must log in or register to reply here.