Its existence has been an on-again, off-again rumor for over a week now, but it looks like a new build of Android 2.2 Froyo for the Nexus One -- FRF72 -- is very real. It finally leaked in the past few hours, we've tested it on a Nexus One of our own, and as far as we can tell, it's straight-up legit. Get it if you dare -- it's up on Google's official servers right now, but if it's pulled, we've no doubt it'll be floating around on a bunch of mirrors ad nauseam. G'luck to ya, folks!

[Thanks to everyone who sent this in]

Good thing for our readers that I’m a night owl, and I happen to love my Nexus One, and love me some frozen yogurt. Especially together: 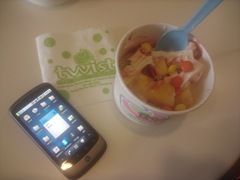 
And now I have my T-Mobile

Nexus One updated with the latest and greatest FRF72 build.


I just happened to be browsing a forum about the upcoming official Android 2.2 Froyo release when I see someone leak a URL for the FRF72 build that Google Employees were given a week ago. Someone at xda-developers.com seems to be the original source.
Download URL and Instructions

Here’s the URL for the upgrade, while it lasts:
http://android.clients.google.com/packages/passion/signed-passion-FRF72-from-FRF50.bc033f9e.zip (1.9MB)
​
Based on the filename, it appears to be an incremental build from FRF50, so you must already have FRF50 installed to use this new build.

I followed the same instructions that we posted here on AndroidPolice.com a few weeks back when FRF50 was leaked, and they worked just fine for me. After step 9, scroll to the top, select Reboot

, and go grab a coffee.
For whatever reason, the first reboot after installing a new ROM takes forever. Here’s my timeline:
(02:02:49 AM) rebooting phone after flashing
(02:03:26 AM) nexus animation starting
(02:05:52 AM) home screen shows up, swipe to unlock, and in the system settings to prove: ​
Total reboot time was just over 3 minutes. Which felt like ages after waiting for the next Froyo build to drop.

What’s In The Upgrade?

We have no idea. We’ve heard rumors that Flash support was updated, and some improvements to make the web browser operate even faster. As we discover anything, we’ll be sure to let everyone know.
Personally, I haven’t noticed any changes yet, but I’ll add more details here if I find anything.

Better if this gets out for the Droid >
L

pretty sure we can use this on droid.

lethalpimp said:
pretty sure we can use this on droid.
Click to expand...

Nope. This is a Nexus build. We need to wait for the next Droid build to leak. There is a difference.
J

More Froyo. Bring it on. New phones, software updates.....:icon_ banana:
You must log in or register to reply here.