3G Signal Strength/Data Speed GNex vs. iP4S side by side comparison

I decided to do some side by side testing between my GNex and my wife's iP4S late last night… My brother in law has been having horrible data issues with his GNex. Verizon has admitted to having data/signal strength issues, and post after post around here complaining, denying, or obsessing about the data/signal issues. Needless to say I have been obsessing over whether I am sharing these problems, or if it all in my head… I haven't experienced any issues with dropped calls, but I have been getting several "cant connect to server" errors and I have had poor Market connectivity when not on WiFi. The overall network performance seems much worse than my OG Droid. Time for some real testing.

I really wanted to compare the GNex to a Razr or Rezound side by side, but the iPhone was the closest thing I could get my hands on.

Disclaimer: I am NOT in a 4G area, so I can only speak for the 3G connection in small town Central Illinois. These speeds will not impress anyone, but are only used for comparison purposes. I am simply trying to determine if there is something wrong with MY phone/radio or not.

So I fire up the Speedtest.net on both my GNex and the iPhone… I'm currently getting around -98dbu signal on the Gnex. Not for sure how to check it on the iPhone. iPhone shows 3 out of 4 bars of 3G. GNex shows 1 out of 4.

I repeated the entire test using the exact same servers again (8-10 servers in all), and the results were repeatable. Certain servers clearly did not perform well with the GNex, while the iPhone could care less.

This leads me to believe that there is nothing wrong with the radio on my GNex… it only reports or displays the "Bars" different. I can say that my OG Droid does get better signal than the GNex. Usually around 5-10 dbu better. I think this is due to the Moto Droid having an exceptional GOOD radio, not the GNex having a bad one. I remember many occasions when my wife's old Blackberry would have no signal, but my OG would be rocking at least a bar or two.

As far as the inconsistencies between test servers… I don't know. Maybe someone with much more knowledge that I have can chime in. Seems like routing issues on Verizon's end, but I'm not for sure why the network would route data differently for different devices. Anyways, it does explain why I was having decent data one minute and connection problem the next. I do believe that this is not a hardware issue and it can be corrected with either a software update or some network fixes from Verizon. Either way, I think I'll be keeping my Nexus for the long haul.
M

No comments, but it's great to see some educated testing.

I personally have not had any issues with my Gnex at all....but on 4G at the same location, the RAZR blows the GNex. I don't have time to write everything up.......but we're talking 11MBps (RAZR) down vs ~7Mbps (GNex).

Heres my one test and im not going to obsess anymore.. these phones are both on my desk at work..

the TBOLT has a slight better Download, but the Upload on the GN is better.... non issue.. i will no longer obsess over what the bars say.. over it....

Furthermore, yesterday, i was getting 30mbps on my phone.. alot goes into network perf testing.. its not just the phone.. have to think of the server as well.. is it getting pounded when you testing it?? etc.. 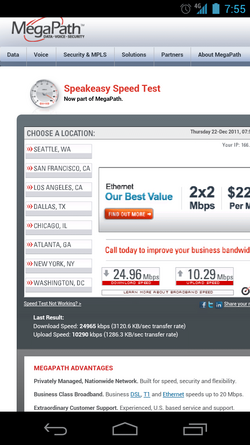 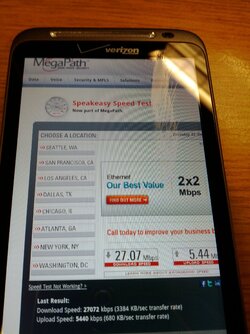 Reasons why you lose Mobile Data signal....is its REALLY your phone? Likely NOT.
2 3 4

B
FINALLY got a GOOD GNex!
2

Reception on the GNEX and location does matter.. and a funny story about iphones too!
2

Are signal issues a problem with the Rezound (like the Gnex)?
2